As the world’s glaciers melt, they’ve begun to release an archive of banned industrial substances back into the environment, chemicals that have been locked, frozen, inside the glacial ice for up to thirty years. 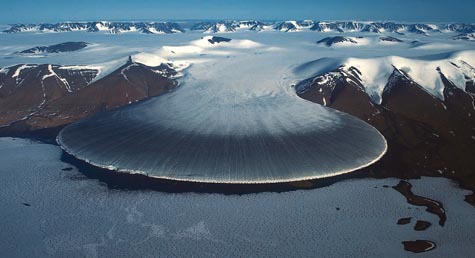 According to Discovery, “many persistent pollutants, including PCBs, dioxins and several chlorine-containing pesticides [such as] DDT” have begun to leach out from melting glaciers in places like Switzerland.

The idea of a poisonous atmospheric archive being unintentionally released—on a global scale—makes me wonder what sorts of news reports we might read in several thousand years’ time, when carbon tombs start to leak their quarantined contents back into the atmosphere. The buried skies of an industrial era, put to pharaonic rest beneath the earth’s surface, will make their operatic reappearance in future human history.

I was astounded to read, for instance, two years ago in New Scientist, that “burying carbon dioxide under the seabed is likely to remain controversial because of concerns that it will eventually leak out. However, a team of environmental engineers now claims that these worries are unfounded, and that natural reactions will lock away the carbon dioxide within aquifers for millennia.” For millennia. In other words, a catastrophic release of entombed CO2 will re-enter the atmosphere—and it will do so well within what could still be the anthropological era.

Already, we see lead, DDT, PCBs, and more flowing out from melting glaciers, bringing back a chemical presence that we thought we had effectively regulated. What strange myths of haunted returns and cursed ancestors might we be forced to conjure when these other, more deeply buried elemental forces reappear?

This site uses Akismet to reduce spam. Learn how your comment data is processed.

BLDGBLOG (“building blog”) was launched in 2004 and is written by Geoff Manaugh. More.